Although it is prudent to note that there must be hundreds of recipes of a simple “machher jhol” on the internet and in print, but, as it is in most cases, the more the number, the more the confusion. And for that, this article will be focussing on a really simple recipe – that of the quintessential “machher jhol”. However, the first thing you may want to ask is, “What exactly is it?” Now, technically speaking, a “jhol” is essentially a runny jus, obtained primarily by adding water or something liquid to the pot while cooking, in order to braise it briefly.

In many households like mine, the quality of the fish is the biggest deciding point during preparation. The fish would be, at first, inspected for its freshness, quality, and origin. In most parts of Bengal, wet markets would have a dedicated section for fish and meat, where vendors will sit with their fishes, both dead and alive, and wait for the customer to appear and take their pick. The initial inspection of the prospective buyer would consist of checking the eye of the fish first. Bright, red eyes would indicate freshness. However, not content with the initial appearance, the buyer may further inspect the gills. Here, bright pink or puce gills confirm freshness. A cautious buyer may then press down on the flesh of the fish to see if its firm (but not hard) and finish with a confirmative sniff. Freshwater fish should not smell too fishy, and once the fish inspection is complete, it would be then handed over to the fishmonger, who would proceed to first remove the scales and then cut them as per the request of the buyer. Mostly, the fish would be cut into thick steaks, the tail would be a separate piece, and the head would be first cut off and then sliced into two pieces. 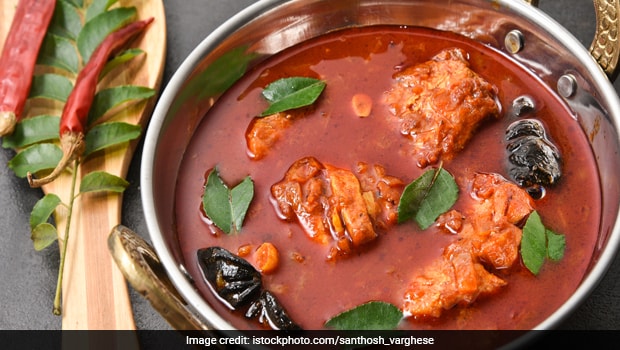 Growing up, I would watch my mother and grandmother sort through the produce and segregate fishes and produce according to the preparation. Here, seasonal availability mattered a lot, and so did the freshness of it. Winters would be all about thick steaks of Bhetki (Barramundi) cooked with cauliflower and peas, while in the summer, tiny Indian Carplet, or mourola fish, would be fried and put into a runny, sour curry, with small lentil vadi and aubergine, and served at the end of the meal, either warm or at room temperature. The basic rule that my grandmother would follow was to ensure that fresh fish should not be overwhelmed with spices and should be kept as simple as possible. It should also not be fried for too long – frying too long essentially results in the flesh of the fish drying out and overcooking once it hits the jhol, and she firmly believed in respecting the ingredients.

The recipe provided here comes straight from her kitchen – growing up, I would watch my maternal grandmother cook virtually every single day. Some days, she would add a touch of nigella seeds as a temper and not add the ginger, on other days, she would simply put a pinch of cumin seeds before adding the ginger, but overall, the basic recipe would be exactly this, because the fish would do all the work, she would claim. I would sit and watch her cook silently, shelling peas or cutting potatoes. She made other things too – but the jhol would be a staple, just like fish is at every single occasion in our house.

While choosing the fish, one must also think of the things one may add to the jhol. The most common ingredient is, of course, the potato. Cutting them in the right shape would be important, and my grandmother would explain them to me. “You see, when you cut it too small, your jhol gets riddled with tiny pieces of potatoes, and they often disintegrate and make it lumpy and gloopy. Cut it too large, and you’ll have to wait for ages to finish cooking.” So, the smart thing would be to cut so that there’s a good deal of surface area on the potato for quicker penetration of spices, but at the same time it cannot be so thick that it takes forever to cook. Therefore, potatoes would be cut in half lengthwise, then cut into 1-centimetre-thick batons, fried lightly to start the cooking process, and it would finish cooking in the jhol. Vegetables would be added according to the season and the kind of jhol one would consume – common additions would be pointed gourd (potol), aubergine, unripe plantains, cauliflower, and peas. Lentil dumplings, or bori, would be added as well, to soak up some of the flavours, which would be then mashed in with your rice while eating. A typical scene growing up would be my mother pouring a ladle of the hot jhol in the equally hot rice, and then, I would attempt, with as much nimbleness I could muster, to mash them together as per my liking, crumble in a bori or a piece of potato, and then eat it as quickly as possible. The fish would be reserved for the end of my meal – the prized treat that would be consumed with a lot of gusto after a long meal riddled with bitters, greens, and other things that are supposed to be good for you. 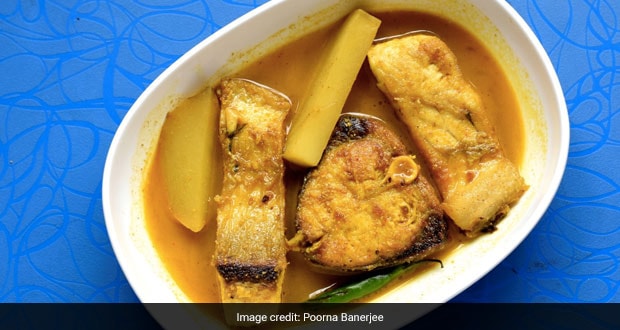 The quality of the fish is the biggest deciding point during preparation of Machher Jhol.

This jeere diye machher jhol recipe has remained mostly the same, except for the addition of chillies, and it has been handed down from one generation to the other in my mother’s family. The cumin is first soaked in water for a few minutes, then made into a paste on a stone sil with a little bit of water, and then the remaining spices, that is, the turmeric and the chilli powder, are added to it, with some water, to make the slurry. The smell of the stone-ground cumin would haunt me as I would add my fish to the jhol, and my grandmother would only use freshwater fishes for this recipe. Sea fishes, she would conclude simply, would not go that well with this recipe. Perhaps she felt that in a city like Kolkata, sea fishes wouldn’t be very fresh, and therefore, not suited to this recipe. You may use small, freshwater fishes, or thick steaks of bigger freshwater fishes, like rohu, catla, or mrigel, all varieties of the Indian Carp.

– 1 inch ginger, made into a paste

– 2 potatoes (cut in half, then sliced into batons, lengthwise)

2. Heat mustard oil till it is really hot and smokes a little, then add the potatoes and fry till the potatoes are golden, about 1-2 minutes, stirring occasionally. Remove potatoes, and then add the fish in batches and fry them till they are golden on all sides, taking care to fry the skin side about 1/2 a minute longer than the other sides.

3. Once the fish is fried on all sides, remove. Drain off all but 2 tablespoons of the remaining oil, and add the ginger paste. Let it cook for 30-40 seconds, then add the cumin-turmeric-chilli slurry and stir that in. Cook this till the turmeric stops smelling raw, about 2-3 minutes, over medium-low heat. Then, add 2 cups of hot water and the potatoes. Let this come to a boil, and then, simmer, covered.

4. When the potatoes are almost done, add the fish and any reserved juices, along with the green chillies. Cover and cook for 2-3 minutes, or until the fish absorbs some of the flavours. Serve with rice.

Disclaimer:The opinions expressed within this article are the personal opinions of the author. NDTV is not responsible for the accuracy, completeness, suitability, or validity of any information on this article. All information is provided on an as-is basis. The information, facts or opinions appearing in the article do not reflect the views of NDTV and NDTV does not assume any responsibility or liability for the same.

About Poorna BanerjeePoorna Banerjee is a food writer, restaurant critic and social media strategist and runs a blog Presented by P for the last ten years where she writes about the food she eats and cooks, the places she visits, and the things she finds of interest. She is deeply interested in culinary anthropology, and food history and loves books, music, travelling, and a glass of wine, in that order.